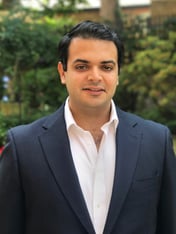 The resurgence of geopolitical tensions between Russia, NATO and Ukraine has contributed to market angst in recent weeks. Having already levied sanctions and counter-sanctions, both camps now risk an escalation of economic warfare as diplomatic efforts are at an impasse and actual war appears unthinkable.

Russia’s relevance to financial markets is at first ambiguous. As a nuclear power, permanent member of the UN Security Council and major oil producer, the country is clearly a major geopolitical player. At the same time, Russia’s direct financial footprint is ostensibly much less significant, with its equity market representing less than 5% of the MSCI Emerging Markets Index, or just 0.64% of world stock market capitalization.1 Yet, we believe that such metrics grossly understate Russia’s relevance to the global economy and markets—the country’s critical role in the global supply chain gives it enormous and asymmetric economic leverage well beyond the oil and gas universe. We would caution investors against ignoring such risks.

The most extreme measures floated in various contexts appear so blunt and mutually destructive that they elicit reflexive dismissal in our view. Such scenarios include the United States removing Russia from US dollar clearing systems, including SWIFT—as was the case with Iran, but not even with Cuba—or Russia ceasing oil and gas sales to NATO members, particularly those in Europe. With fossil fuel prices hitting multi-year highs even prior to the current crisis, we believe freezing Russia’s ability to take payment for energy exports would be counterproductive for Western governments scrambling to ensure adequate and reasonably priced energy sources. Though Europe has accelerated investments into liquid natural gas, it remains dependent on Russian pipeline gas. Analogously, we believe ceasing gas exports to Europe would decimate the Russian balance of payments, despite Russia’s improved resilience to external shocks after the country’s dramatic post-2014 macroeconomic overhaul, which included an initially painful shift to a floating currency regime.

Rather, we believe Russia’s broader role in the global supply chain gives it enormous—and thus far, unused—economic leverage through its key role in the production of non-fossil-fuel commodities that are less significant to the country’s fiscal and external accounts. Aluminum, titanium and uranium stand out as just three areas to watch in this respect.

In our view, the global aluminum market’s sensitivity to Russian geopolitical risks is perhaps most obvious. In April 2018, the US government sanctioned Russian oligarch Oleg Deripaska and Rusal, one of the world’s largest aluminum producers, which he then controlled. The company’s stock saw a 50% intraday drop and the futures price of aluminum increased nearly 30% over the course of a few days, reflecting panic among a range of Western companies reliant on cheap and plentiful aluminum for the production of everything from food packaging to aerospace systems.2 While Deripaska’s divestment from Rusal eased the 2018 crisis, the company’s key productive assets remain in Russia, giving the Kremlin leverage over a range of Western supply chains.

Ironically, we believe Russia’s leverage may be greater in an even more obscure corner of the global supply chain: the market for titanium. A single Russian company, VSMPO-AVISMA, represents more than 30% of global titanium production, according to Fitch Ratings. However, this large market share figure grossly understates the company’s significance to global supply chains in our view. Specifically, the company’s prices for particular products have exceeded the headline price for raw titanium sponge by as much as 10x,3 reflecting the niche nature of titanium inputs. As recently as November 2021, the company signed a memorandum of understanding with Boeing that would retain VSMPO’s position as the US plane maker’s largest source of titanium for current and future commercial production. The company’s relevance to European aerospace is even greater, with VSMPO estimated to represent approximately 65% of Airbus’s titanium consumption, 35% of Boeing’s, and the entirety of Brazilian company Embraer’s. Given the strict production standards necessary in such specialized applications, becoming a certified supplier to aerospace companies is an expensive and—most importantly—time-consuming process, rendering their rapid switching impossible. That the Russian state owns a significant stake in VSMPO through a holding company directly linked to arms production and sales only complicates Western efforts at so-called “smart sanctions” in our view. While VSMPO won exemptions from American sanctions in previous rounds of tensions, there is nothing to prevent the Kremlin from imposing its own export restrictions, with accordingly horrifying implications for supply chains in the US and Europe.

Uranium and Other Markets

Russia’s leverage is not limited to commodities produced within its own borders—a key point we believe is missed by analyses considering only headline Russian market share in various markets. Moscow retains enormous influence in other post-Soviet states, including Belarus and Kazakhstan. Both of these countries are key members of the Eurasian Union often billed as a post-Soviet counterparts to the European Union. Belarus is not only a major producer of potash and other commodities, but also home to BelAz—a Soviet-era manufacturer of the largest heavy trucks in the world. These vehicles are used by mines globally, including those operated by international mining conglomerates. Kazakhstan is a central player in numerous commodity markets, boasting the largest reserves of zinc, tungsten and barite in the world. It is particularly important in the uranium market, accounting for nearly a quarter of global uranium production. Kazakhstan has the second-largest uranium reserves in the world, and state-owned Kazatomprom is one of the most efficient producers in the world. Tightening emissions standards as electrical demand accelerates have placed a premium on nuclear energy production—even as global uranium stockpiles have declined amid planned and unplanned mine production cuts. In this context, we believe any sustained interruption to global uranium supplies from the former Soviet Union would be disruptive indeed. That the Kremlin recently sent troops to help Kazakhstan’s president Kassym-Jomart Tokayev consolidate power in a Russian-speaking country in which nearly a quarter of the population is ethnically Russian only underscores Moscow’s influence.

While scenarios such as an outright shooting war between NATO and Russia or Russia’s cessation of gas flows to Europe in midwinter appear unlikely due the mutual pain they would inflict, considering Russia’s own possible sanctions is sobering in our view. Global supply chains are still recovering from shocks triggered by the US-China trade war and COVID-19. Looking beyond the obvious areas like oil and gas while considering geopolitical dynamics reveals significant Russian leverage over global—and especially Western—supply chains. Crucially, we believe such leverage is asymmetric, with the potential to hurt Western businesses, workers and consumers far more than they would Russian interests. While the direct financial footprint of both Ukraine and Russia is clearly small, we believe the risk of another global supply chain shock with attendant implications for global growth is material and should not be overlooked.

This paper is provided for informational purposes only and should not be construed as investment advice. Opinions or forecasts contained herein reflect the subjective judgments and assumptions of the authors only and do not necessarily reflect the views of Loomis, Sayles & Company, L.P. Other industry analysts and investment personnel may have different views and opinions. Investment recommendations may be inconsistent with these opinions. There is no assurance that developments will transpire as forecasted, and actual results will be different. Information obtained from outside sources is believed to be correct, but Loomis Sayles cannot guarantee its accuracy. This material cannot be copied, reproduced or redistributed without authorization. The information is subject to change at any time without notice.

Examples above are provided for illustrative purposes only and should not be considered recommendations for action by investors. They may not be representative of current or future investments and they have not been selected based on performance. Loomis Sayles makes no representation that they have had a positive or negative return during the holding period.